There’s so much to love about the cannabis plant, it’s hard to know where to begin. It sprouts gorgeous flowers that are dyed with the full spectrum of greens, purples, and oranges and covered in dazzling crystals. It serves up a mouthwatering variety of deliciously funky smells and flavors. In hemp form, it’s a sturdy material for textiles, paper, building materials, and more; and its seeds and oils provide a healthy dietary source of essential fatty acids.

But let’s be honest — what we really love are its recreational and medical benefits! And those are thanks in large part to cannabinoids.

This Cannabis University section will teach you everything you need to know about marijuana’s most famous compounds.

Cannabinoids, especially THC and CBD, play a major role in how marijuana affects us. Together with terpenes, they determine the medical benefits and type of high that you can expect from any given strain. Generally speaking, THC affects the mind and CBD affects the body, but the full story is a little more complex. 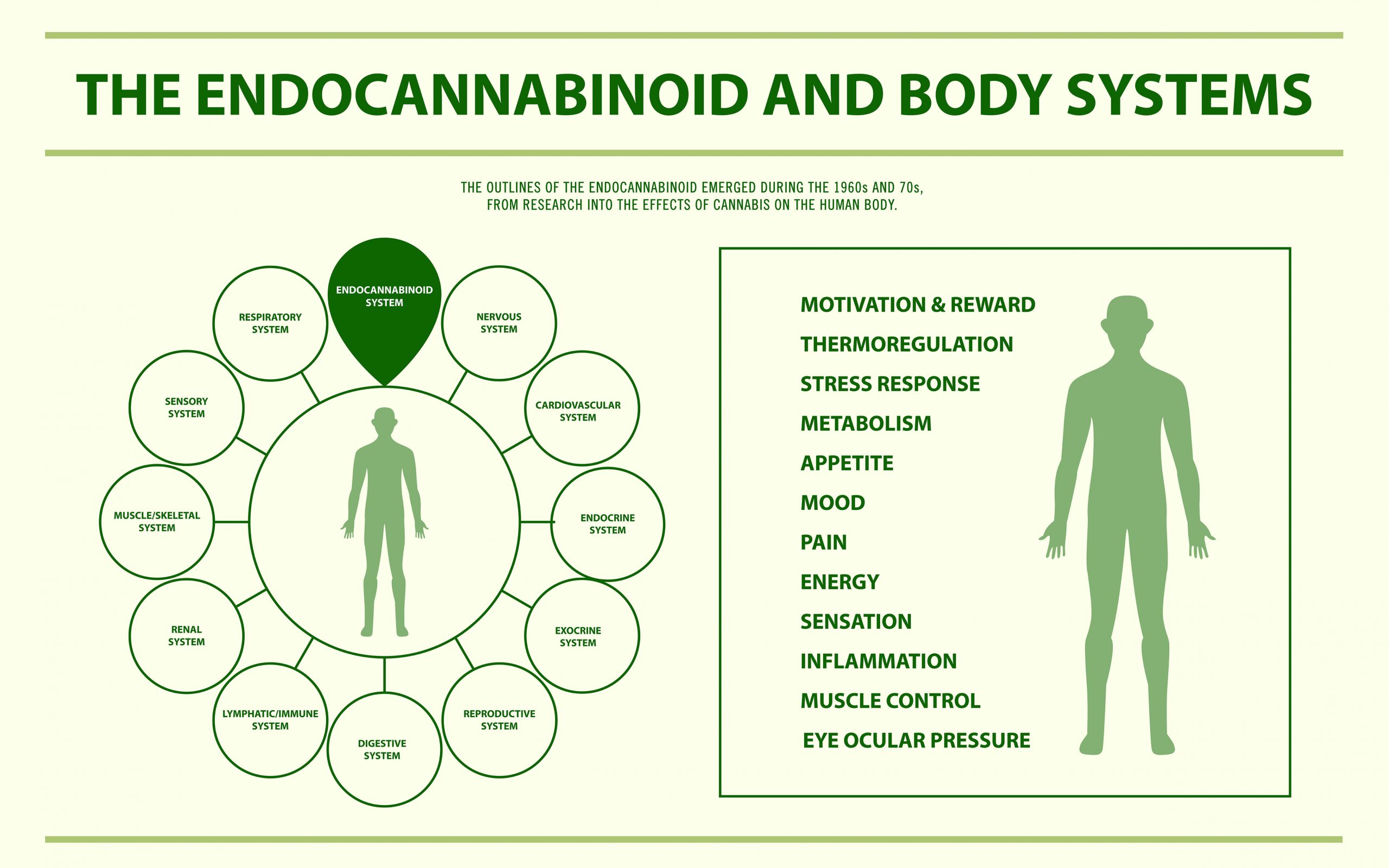 While research into cannabis is relatively new and constantly evolving, scientists have a pretty good idea of how cannabinoids work. Here’s what we know:

Cannabinoids refer to a wide range of chemical compounds found in cannabis that provide psychoactive and therapeutic benefits when ingested.

They closely mimic naturally occurring compounds in our bodies called endocannabinoids, and they work by binding to receptors in our endocannabinoid system, which regulates many important functions like metabolism, motor control, and sleep.

Importantly, most of the cannabinoids in raw cannabis are in a precursor acid form (THCA, CBDA, etc.) that our bodies can’t easily absorb. They need to be “decarboxylated” (normally by applying heat) to convert them to the neutral cannabinoid form (THC, CBD, etc.) that we can enjoy!

There are more than 100 types of cannabinoids and at least nine subclasses, but here we’ll be focusing on some of the most popular ones: tetrahydrocannabinol (THC), cannabidiol (CBD), cannabinol (CBN), and cannabigerol (CBG). 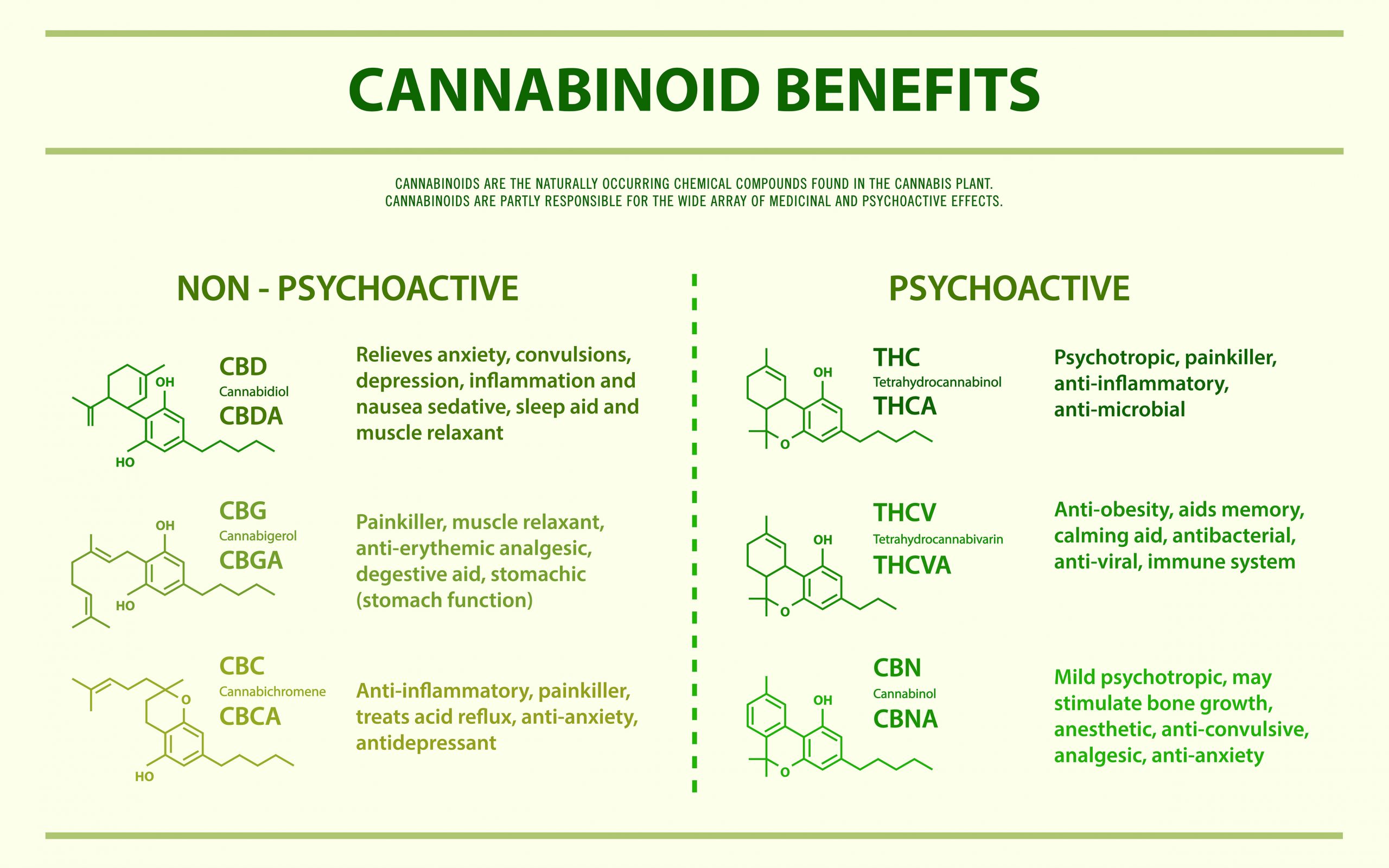 The main psychoactive ingredient in cannabis is delta-9-tetrahydrocannabinol (Δ9-THC).

When THC is ingested, it travels to your brain and binds to the CB1 receptors of your endocannabinoid system. These receptors are designed to receive a natural chemical your body produces called anandamide, which creates euphoric effects similar to a “runner’s high,”” alongside other functions. When THC binds here instead, it replicates this response, giving users a blissfully intoxicated feeling. It also binds to CB2 receptors throughout your body, providing relief from pain, depression, nausea, eye pressure, muscle spasms, and more.

It’s important to note that THC doesn’t work the same on everyone, and some people will have the opposite reaction and become more anxious when consuming THC. And as with most substances, too much of a good thing can be overstimulating and uncomfortable for just about anyone, so be sure to exercise moderation and take stock of how you’re feeling before taking another hit.

Cannabidiol, or CBD, is an increasingly popular cannabinoid because of its effectiveness in treating a host of medical symptoms, including epilepsy, anxiety, insomnia, and inflammation. Unlike THC, CBD is not psychoactive, meaning it won’t make you feel “high,”” per se. You’re much more likely to feel the effects in your body than in your mind; in fact, there’s evidence that CBD inhibits THC, which reduces your feelings of intoxication when you take both together.

Rather than directly attaching to endocannabinoid receptors, CBD appears to influence them indirectly, such as by preventing other (natural) endocannabinoids from being broken down, thereby enhancing their effects.

Cannabinol, or CBN, is a non-psychoactive compound created when THC breaks down over time (so unsurprisingly, it’s usually found in older cannabis).

Research is still in its early stages, but studies have shown that CBN has powerful antibacterial and anti-inflammatory properties, as well as potential for treating glaucoma, low appetite, and some neurodegenerative conditions.

Most notably, CBN appears to combine with THC to considerably increase the latter’s sedative and euphoric effects.

Although you might be able to create some CBN by leaving your weed exposed to open air for a long while, the best way to experience this cannabinoid is to try some products specifically developed with isolated CBN, such as edibles and topicals.

Finally, cannabigerol, or CBG, is another non-psychoactive compound that’s naturally found only in very low quantities in cannabis, but which is being increasingly artificially synthesized due to its potential medical benefits.

Studies have indicated that CBG is especially good at treating glaucoma, protecting against nerve cell degeneration, decreasing inflammation, inhibiting certain muscle contractions, and slowing the growth of cancer cells. It has also been shown to have antibacterial, antidepressant, and appetite-stimulant properties.

Until CBG is more widely understood and available, the best way to test out this fascinating cannabinoid is to try a full-spectrum CBD oil. 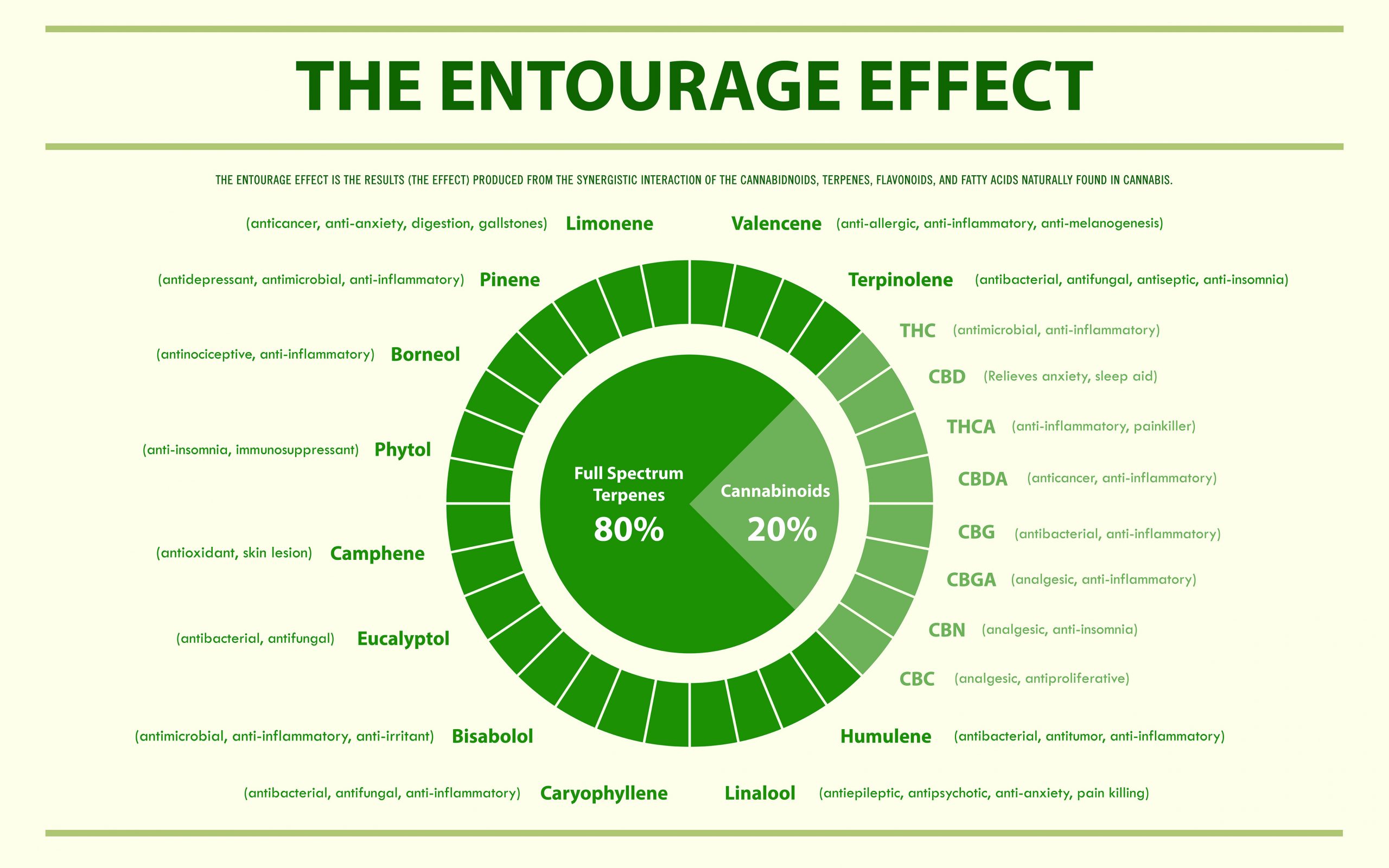 But as powerful as these cannabinoids are, they can’t do it all on their own. The full effects of a marijuana strain are only possible thanks to the combined powers of cannabinoids and terpenes through a phenomenon known as the entourage effect.

By understanding everything that’s going on in your weed – not just the topline THC and CBD percentages – you’ll have a more nuanced and accurate understanding of how it will affect you.

That’s why we label every Maggie’s Farm strain with its cannabinoid percentages as well as its terpene concentration, so that you can anticipate the high and make an informed decision about the perfect strain for you.