How to Smoke Weed 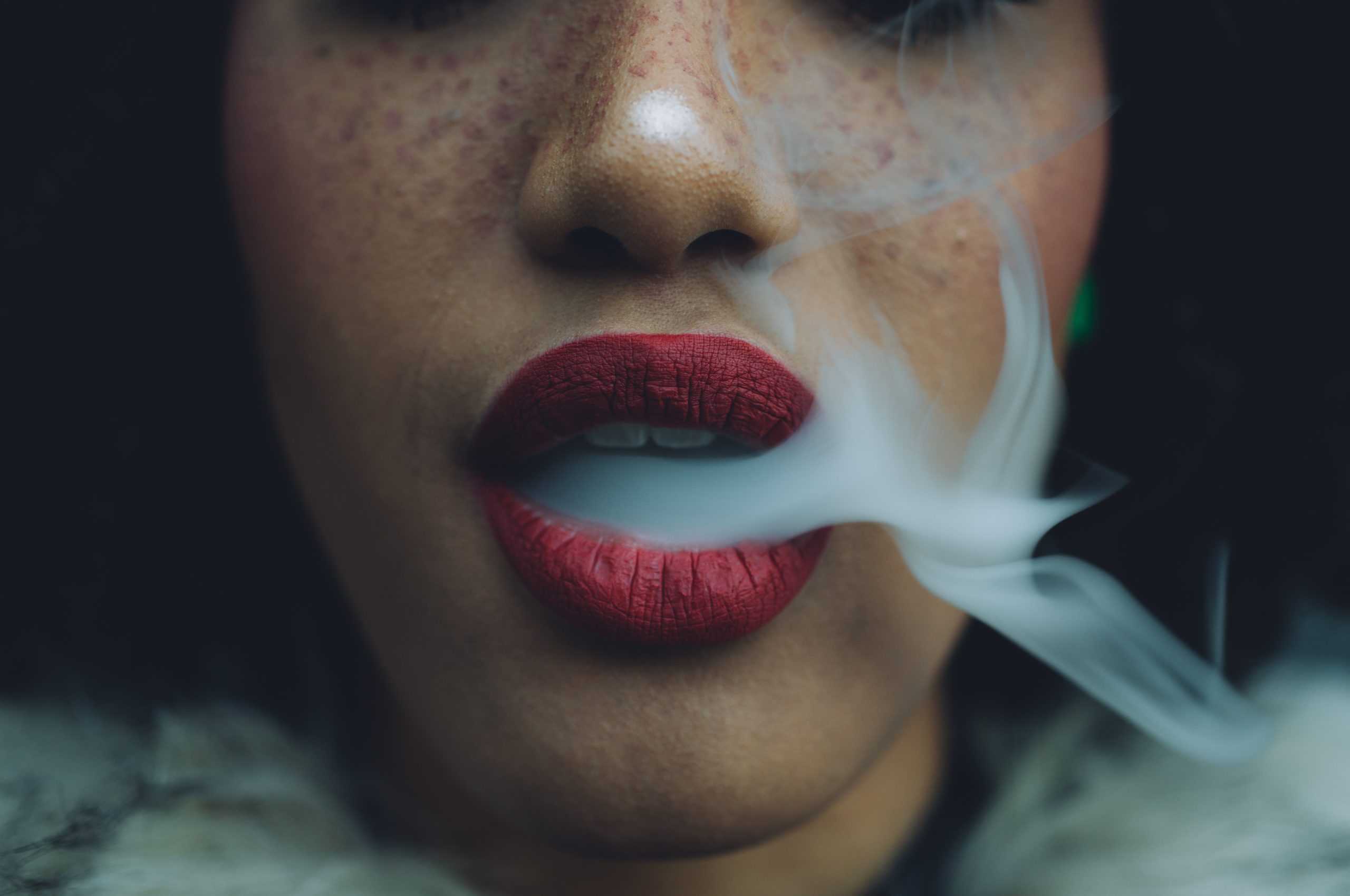 You’ve already learned How to Order Weed, but now you’re sitting at home with a bag of delicious marijuana and no idea how to smoke it. Don’t stress – with just a few simple tools, you’ll be lighting up and flying high in no time!

In this section of Cannabis University, we’ll teach you how to smoke out of any vessel you choose, from joints to bongs and everything in between.

The first time you smoke weed, it’s important to go slow and make sure you don’t overdo it. If you’ve never gotten high before, you won’t know exactly what to expect, and it’s easy to keep smoking until the effects wallop you all at once. That’s why we recommend taking one or two hits and then waiting at least 15 minutes before going back for more.

Never feel pressured to smoke more than you’re ready for. You can always come back to it later. 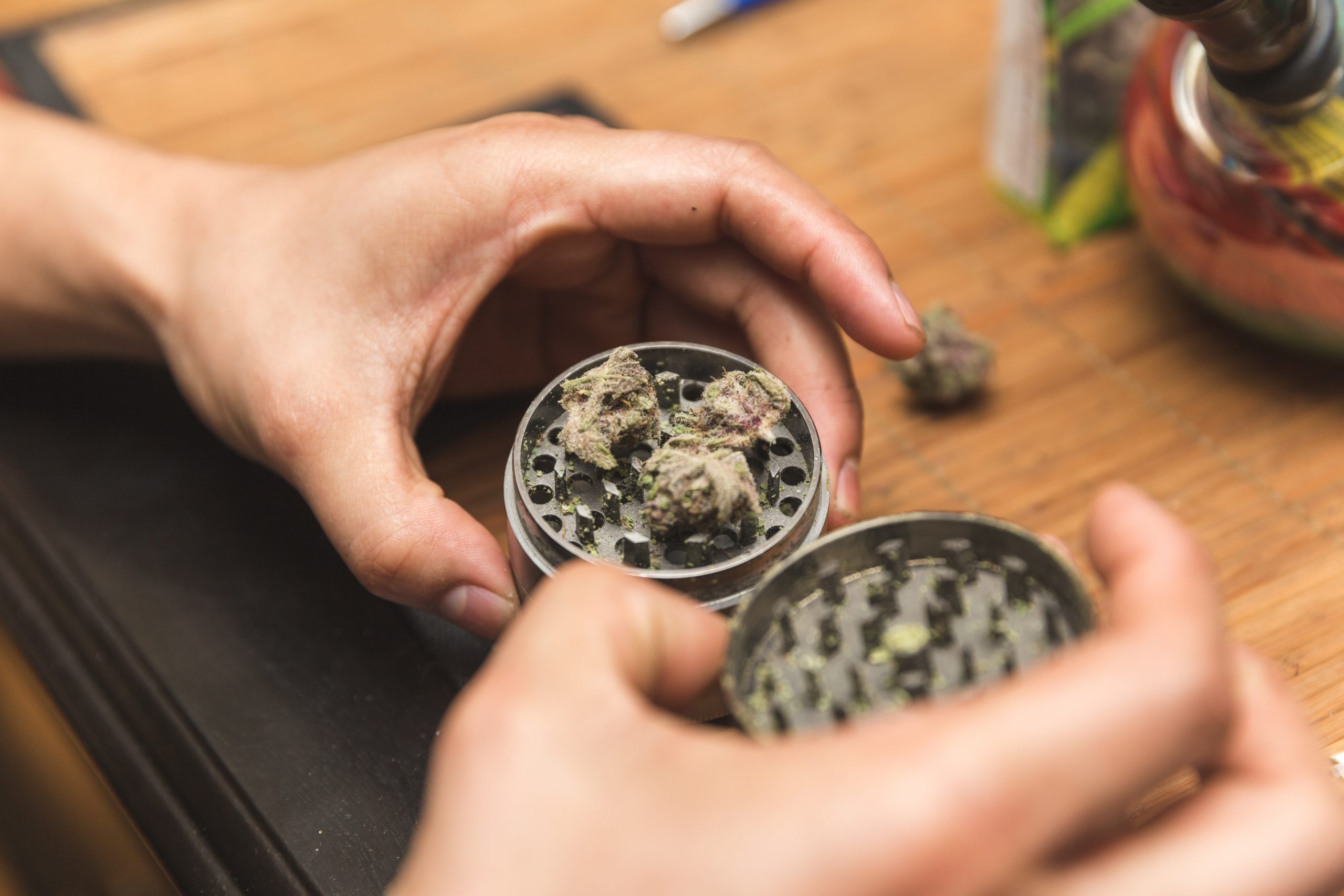 First things first — you need to turn that hefty nug into a nice, fluffy pile of crushed marijuana. You can use your fingers, but it’ll turn out much better if you use an herb grinder, especially one with multiple chambers. Be sure to pinch off any stems (the hard, woody part holding the nug together) and throw them away.

The better you break down your weed, the more evenly and smoothly it’ll burn, so don’t be tempted to rush this step. 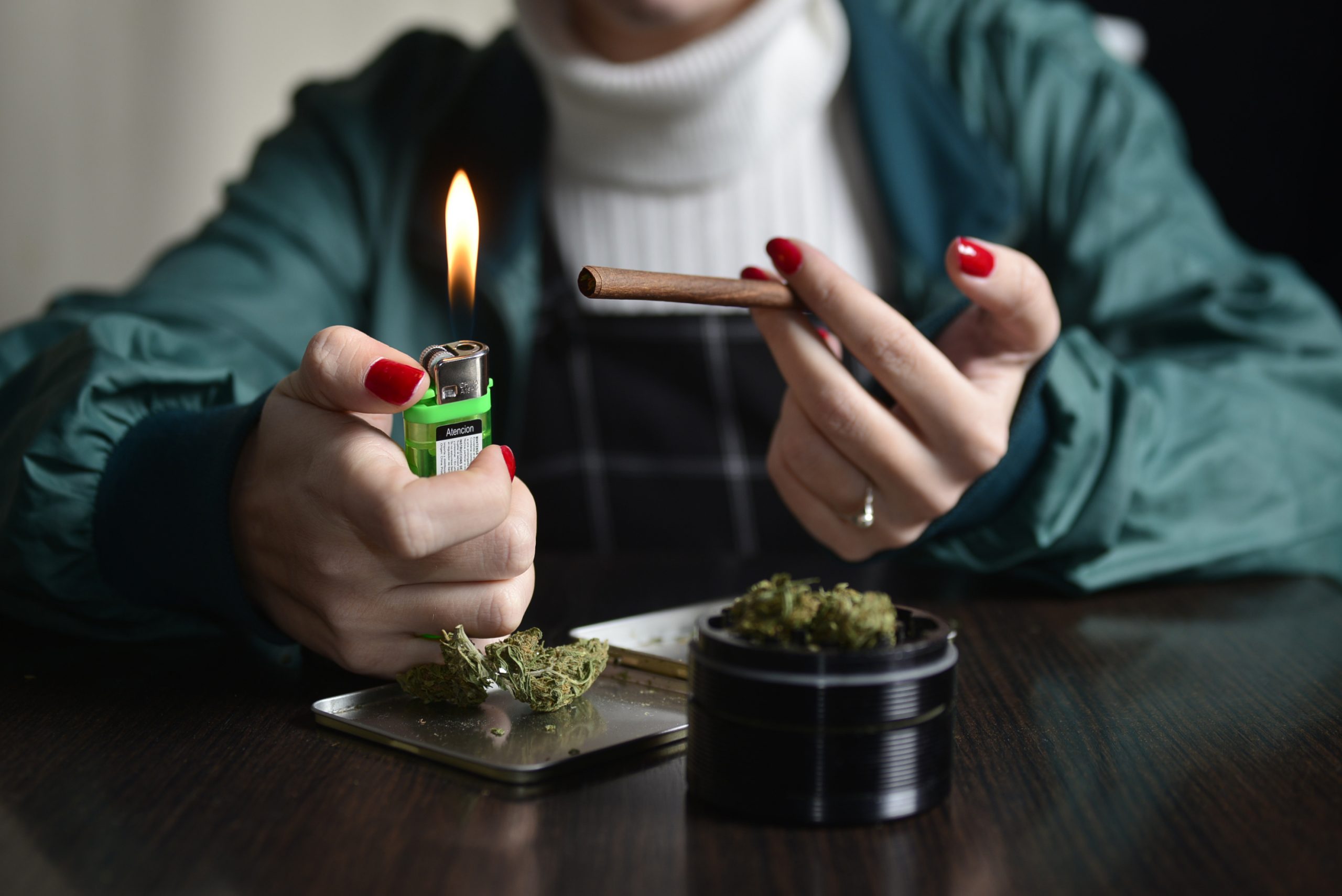 The most common tool for lighting your weed is a good ol’ fashioned butane lighter, but if you want to avoid the flavor and potential risks of butane, try using a hemp wick for a more even, natural, and flavorless heat source.

To get the full effect of your weed, you’ll have to actually inhale the smoke (rather than just holding it in your mouth like with a cigar). However, despite what you may have heard, holding the hit in your lungs won’t do anything to increase your high. Nearly all of the THC is absorbed instantly upon hitting your lungs, so holding your breath does nothing but deprive your brain of oxygen and make you feel lightheaded.

If you really want to get higher, the solution is simple – take another hit! 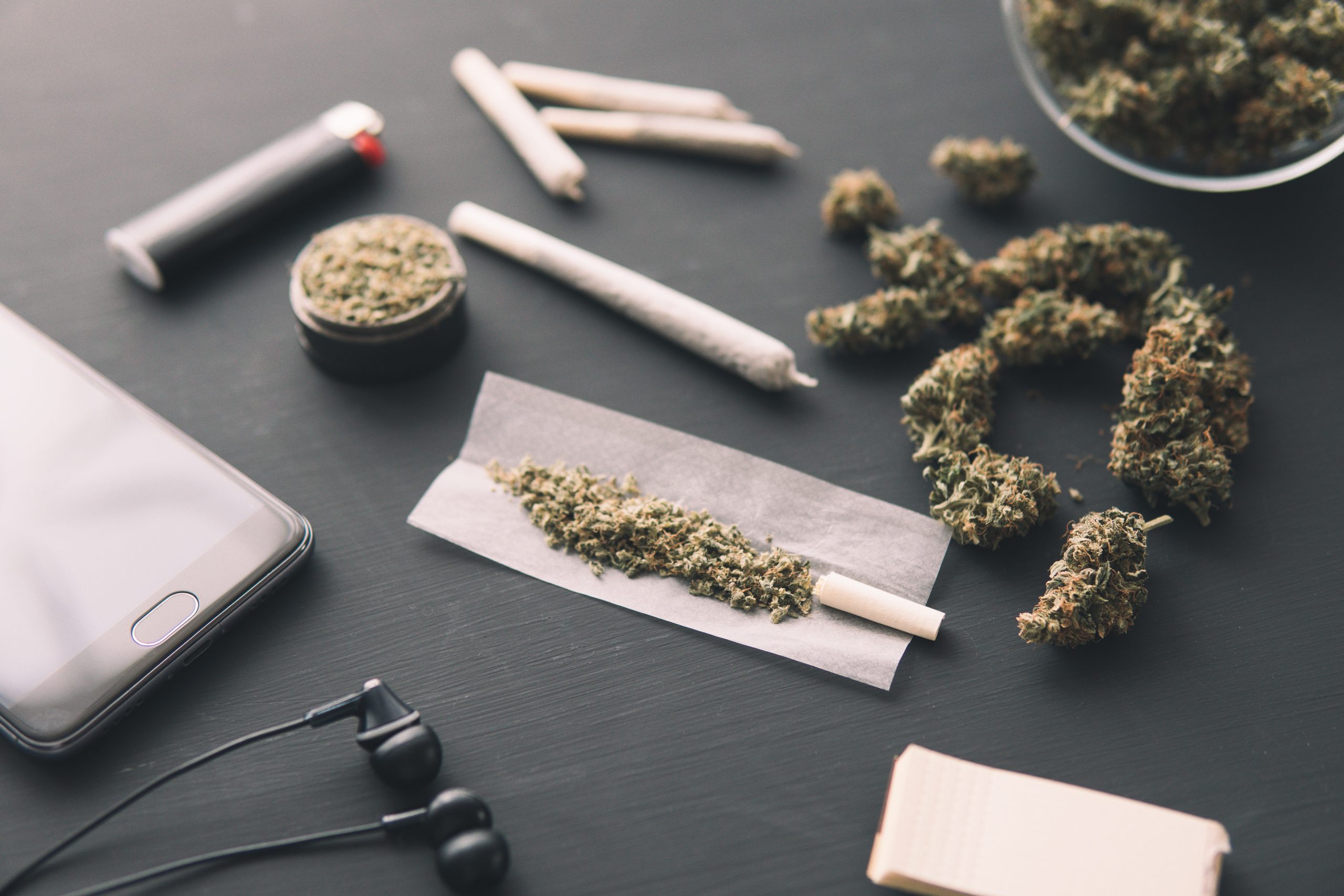 Joints are one of the most iconic ways to smoke weed, but rolling one yourself can be a major pain. The best way to ensure a smooth and enjoyable smoke is to buy a pre-roll, which will always be tighter and better-packed than a hand-rolled joint.

But if you’ve got rolling papers, plenty of time, and a high tolerance for frustration, we’re more than happy to walk you through the process.

How to Roll a Joint

How to Smoke a Joint

Joints and pre-rolls are smoked just like cigarettes, but if you rolled your own, you might find that it burns unevenly. Here are some tips to avoid that.

To get it started, hold the flame of a lighter on just the tip while slowly rotating the joint all the way around. You want to create a “cherry” (the lit tip) that’s strong and even on all sides before starting to inhale.

If the joint starts to “canoe” (burn unevenly on one side) while you’re smoking it, you can try to shape the cherry by wetting your finger and gently touching it to the fast-burning side to slow the burn and then using a lighter (without inhaling) to coax the slow-burning side to catch up.

A blunt is just like a joint, except it’s rolled up in a cigar or blunt wrapper, which is typically made from tobacco leaves. If you’re not used to the nicotine in the tobacco, be aware that you’ll likely experience side effects like dizziness, nausea, and headaches. Although blunts are bigger and longer-lasting than joints, they create more carbon monoxide and are probably the least healthy smoking method on this list. But if you can’t resist the full Jay-Z experience, we’ll teach you how to get properly blunted.

How to Roll a Blunt

How to Smoke a Blunt

Just like a joint, you’ll want to light the tip of the blunt first before you start inhaling. After you have a solid cherry going, take a few quick puffs (not full inhales) to encourage some airflow into the body of the blunt.

Once you’re up and running, remember that you don’t need to constantly hit the blunt to keep it lit. The beauty of a thick, tightly-packed blunt is that it’ll burn slow enough for a longer session, so take your time and enjoy the ride.

Also known as “pieces,” “bowls,” and “glass,” pipes are a classic and simple way to smoke cannabis, and they come in a huge variety of shapes, sizes, and materials. Weed goes in one end, your lips go on the other, and you inhale to pull the flame into the weed and the smoke into your lungs. Easy as that!

When packing the bowl (the hollow area that holds the weed), make sure the hole in the bottom isn’t so wide that your weed will fall or get sucked through. If it’s too big, use a piece of stem, a bigger chunk of unground weed, or a “glass screen” to stopper it. Never use aluminum or any other metal as a stopper, since it can give off harmful chemicals when heated. 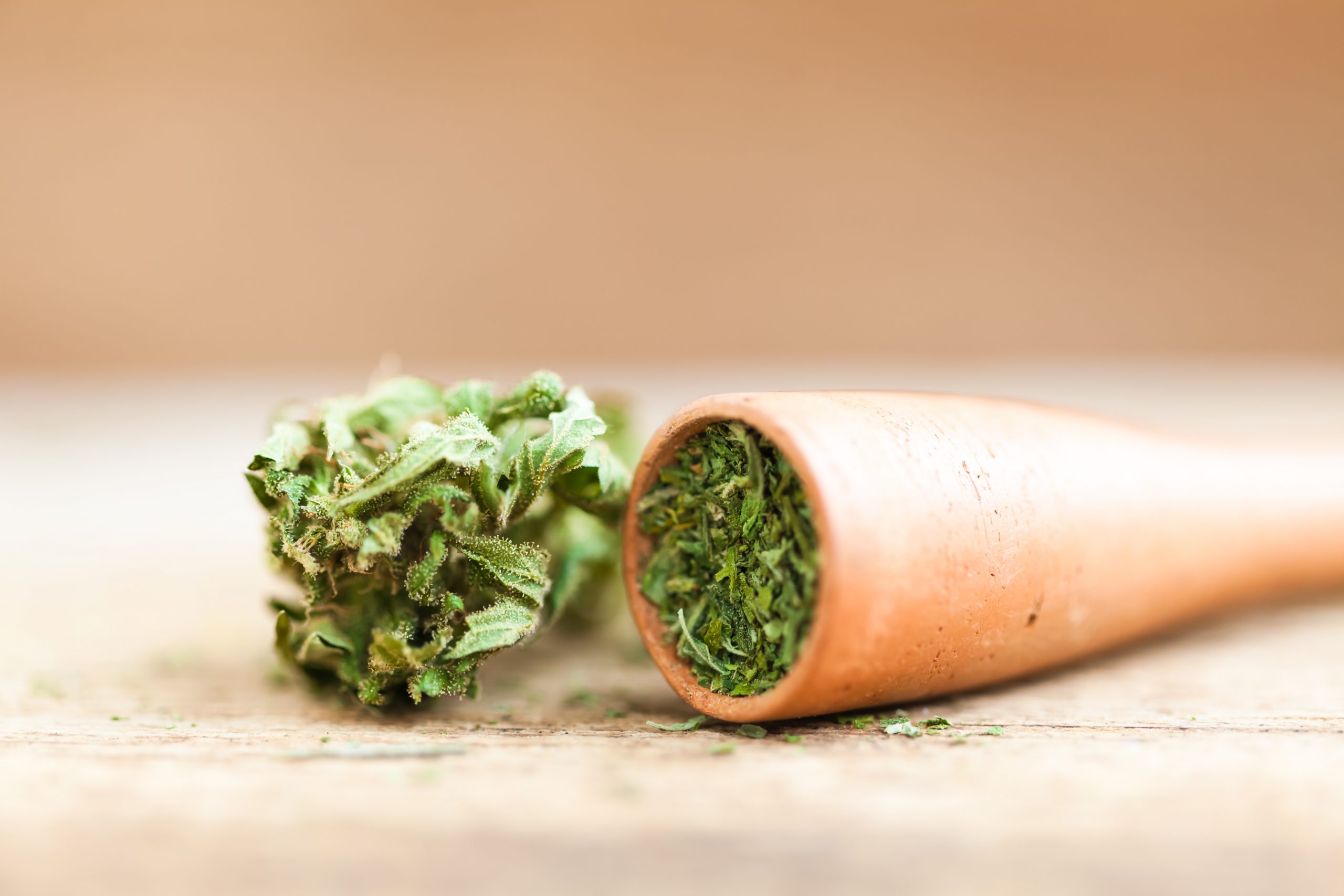 Smoking from a straight pipe (also called a “single-hitter” or “chillum”) couldn’t be easier. Simply press a pinch of ground weed into the bowl at the top and add more as necessary until it’s full. Make sure it’s packed tightly enough that it won’t come spilling out when you hold the piece horizontally.

Unlike a joint, you’ll want to start inhaling as soon as you touch the flame to the weed. After it’s lit, you can take the flame away and keep the cherry going by taking short puffs to pull oxygen through.

When the bowl is finished, tap out the ash and repeat! 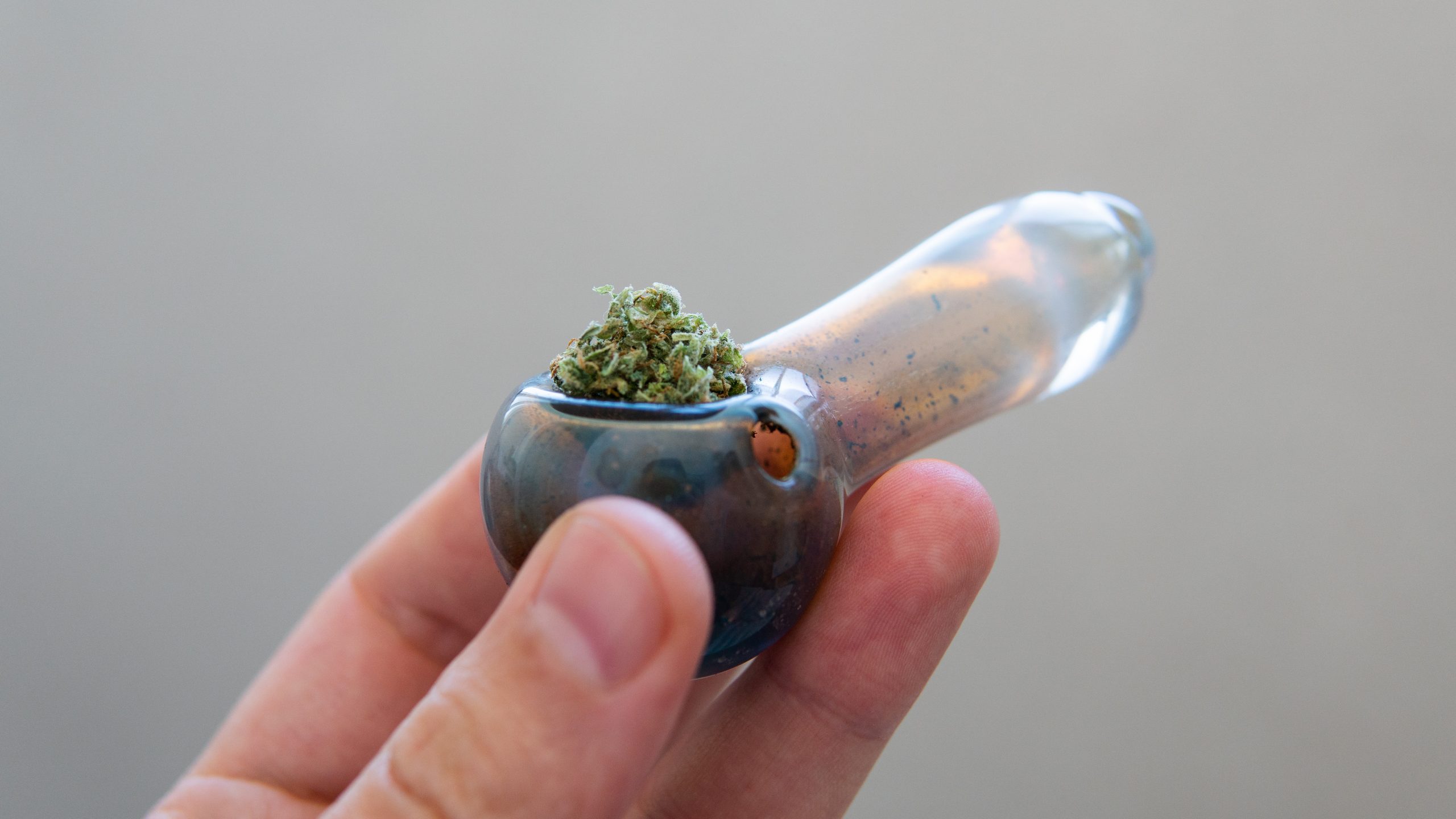 This ubiquitous style of pipe adds one extra feature, but it’s super easy to master. The “carb” (an extra little hole on the side) allows you to control the airflow for a stronger hit.

Start by loading the bowl and placing your lips on the mouthpiece, same as before. But this time, also place your thumb firmly over the carb and hold it there.

Light the bowl (starting just on one side, rather than roasting the whole thing) and start sucking air slowly through the mouthpiece. This will cause smoke to build up in the pipe. After a second or two, release your thumb from the carb to allow the smoke to rush through the pipe and into your mouth. Voila!

Depending on how tightly you packed it, you should see a cherry burning deep inside the bowl, but it won’t last long. Pass the pipe to the next person to keep it going, or cover the bowl with your lighter (not your hand!) to smother the flame. 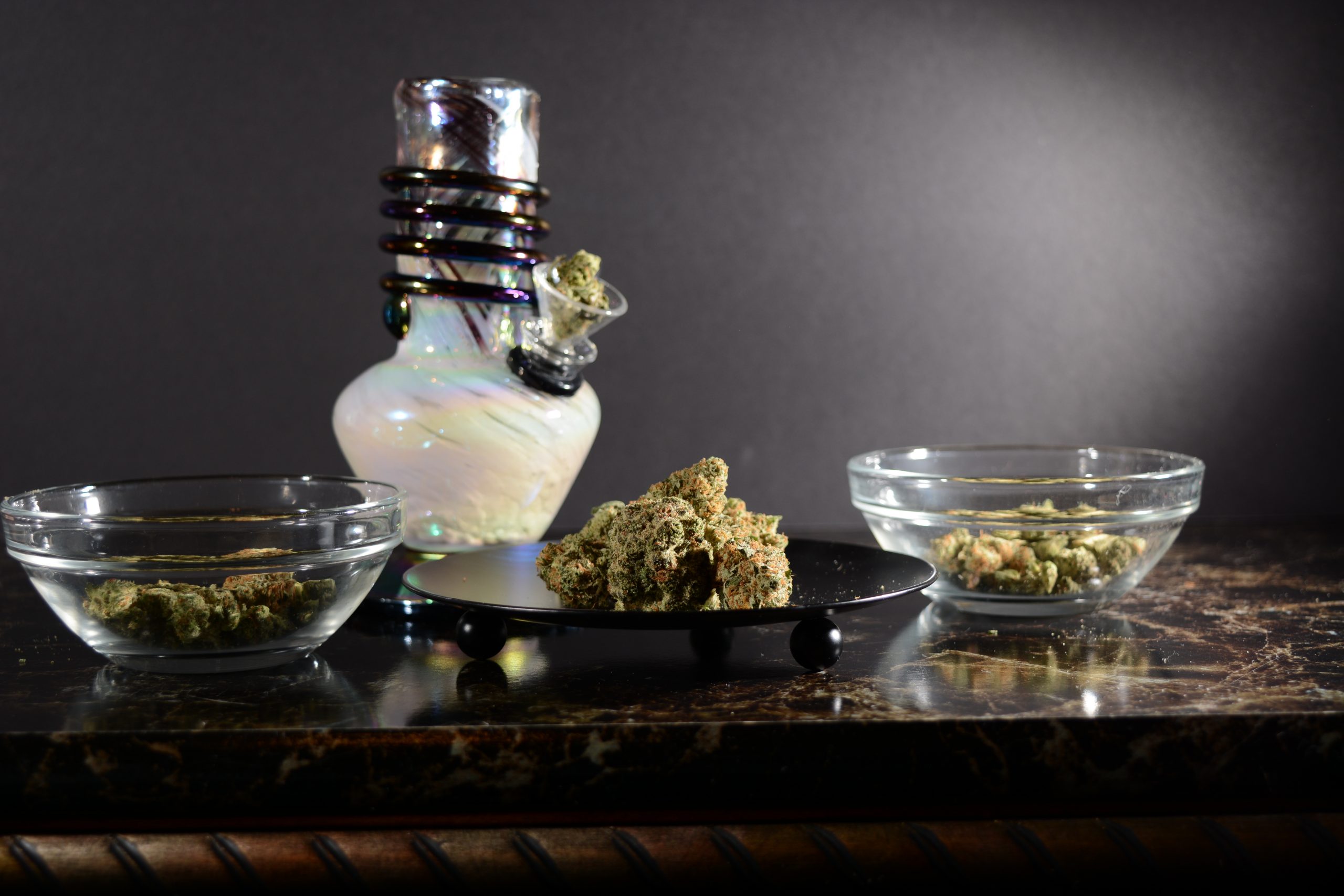 All that complicated glass can look intimidating to novice users, but if you can smoke a pipe, you can definitely smoke a bong. Bongs — also known as “water pipes” — have a basin of water at the bottom to cool and filter the smoke, allowing for bigger hits and less strain on your lungs.

How to Load & Smoke a Bong

Start by pouring water through the top of the tube into the main chamber. Add enough water to submerge the downstem (the tube of glass running from the bowl to the chamber), but not so much that you’ll suck it in when taking a hit. If there’s a pinched area forming a shelf toward the top of the tube, add some ice cubes for an extra cooling effect.

Then load the bowl with weed and place your mouth against the mouthpiece. Light the bowl and inhale, watching the chamber and tube fill up with smoke. Once it’s filled with the amount of smoke you want, gently pull the bowl out of the downstem to release the smoke — this works just like the carb on a pipe.

When it comes to enjoying cannabis, we’ve just scratched the surface with joints, blunts, pipes, and bongs. There are so many other ways to consume weed in all its glorious forms, from dabbing and vaporizing to eating and even wearing it.

If you’re smoking in a group, remember to practice proper smoking etiquette. Start by loading enough for everyone, or get multiple pieces going at once if the circle’s too big for just one.

Never torch the entire bowl at once; preserve the “greens” for as long as you can by lighting just a sliver of the side and slowly working your way in. If you get a proper cherry going, this won’t be an issue after the first light.

And one last thing – never pocket the host’s lighter!

Join Our Loyalty Program! X
This site uses cookies. By continuing to use this website, you agree to their use.Ok